I made up a binder to plan our trip and this was on the cover… it is how I roll!

The movie Planes, Trains, and Automobiles is one of my favorite classics. It never gets old watching how a simple trip falls apart into complete chaos. It might have been a bit odd for me to be excited taking a trip using those exact forms for transportation (in the same order, none-the-less), but I was optimistic that our trip would turn out much better. Brittany (my lovely wife) and I were planning to take a plane from Seattle (SEA) to New York (via EWR); a train from New York (NYP) to Jacksonville, FL (JAX); and then a nice little drive down the Florida coast to Vero Beach, FL.

Brittany had never been to New York City and we wanted to visit my dad in Vero Beach. You probably can tell that I love flying, but I was at a place in my life where the idea of flying back and forth across the country twice in a few 737s was not appealing, so I started to get creative.

The outside of an Amtrak car with Viewliner Roomettes – Photo: Amtrak

I realized that for about the same cost to fly from New York down to Florida, we could purchase a Viewliner Roomette on the Amtrak Silver Service. Of course the travel time would be a bit more… but the experience would be very different. Neither of us had traveled overnight on a train and I was stoked about the idea!

Although the train continued farther south, I wanted to round out the experience by de-training (that a thing?) in JAX and renting a car to drive the rest of the way. The drive is only about three hours to our final destination, but we decided to make it a two-day adventure. We wanted to smell the roses and also stay at a hotel right on the water. We had our quest locked in!

Buckle up… it is time to first start the PLANE portion of our journey!

THE PLANE… TO NEW YORK 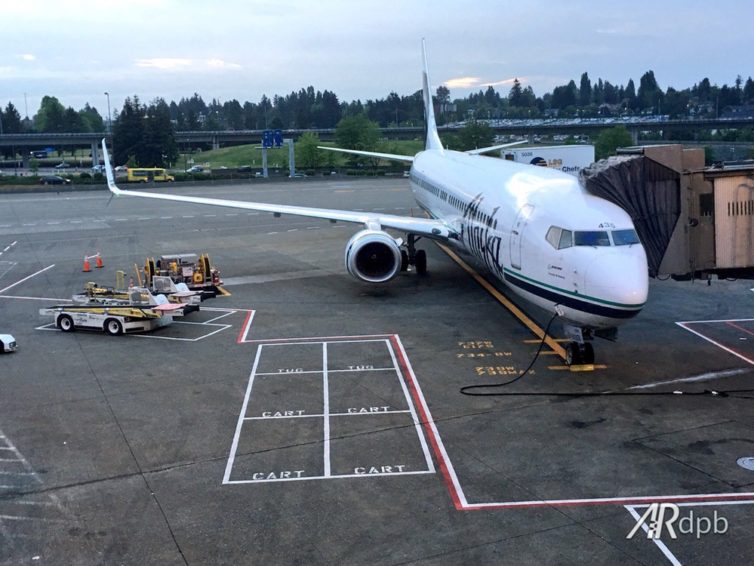 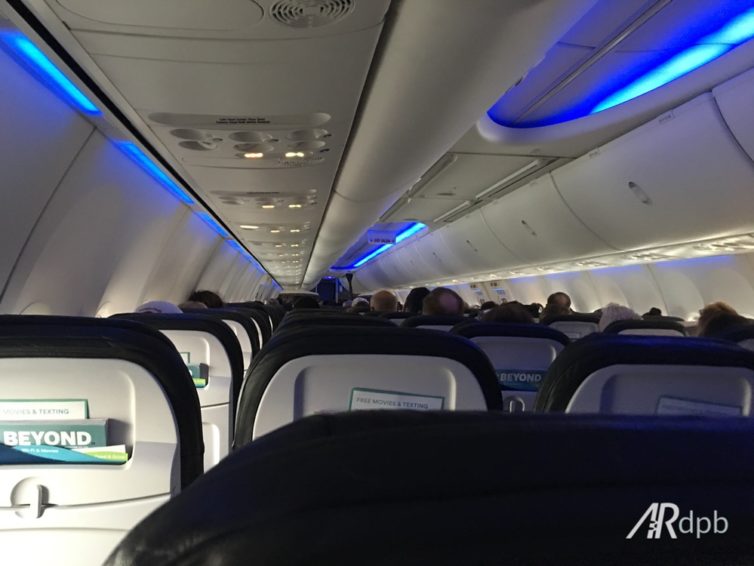 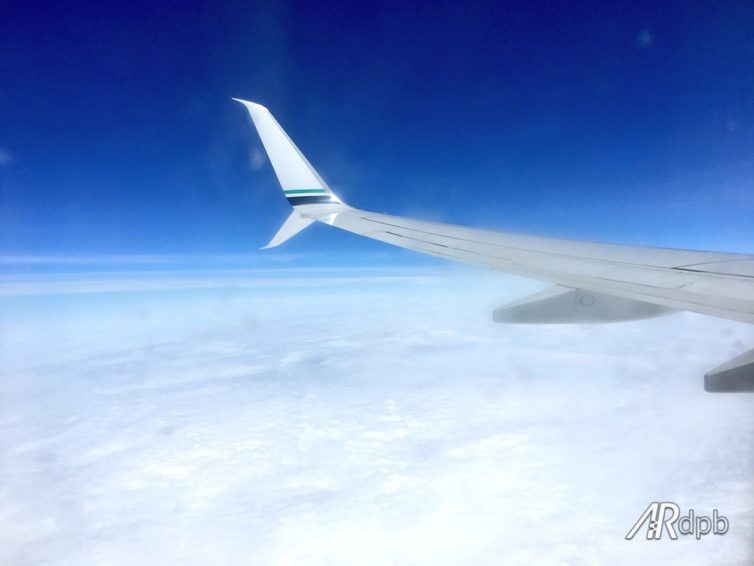 The window film was coming off, making for bad photos. 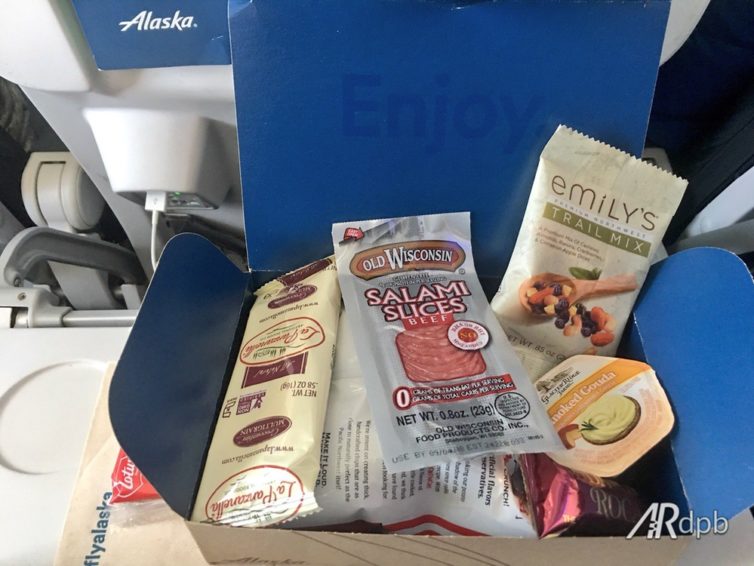 I should mention that this trip happened a while ago — May of 2018. I have always wanted to share it, but never got around to it. Now that many of us are not traveling, due to the coronavirus, I thought it would be a good time for me to look back and reminisce.

I am not a mileage hound, so when I get to use my companion pass on Alaska Airlines for a cross country flight, I feel legit. However, I didn’t feel as legit when I ended up in the middle seat. Brittany and I originally booked seats 27A and 27C, hoping for an empty middle, but this 737 was full (remember those days?). The passenger who was in the middle had no issue taking the aisle and I was a gentleman and let Brittany take the window (awe).

Not perfect, but gives the basic idea of the journey – Image: GCMap.com

Although I can’t remember specific details of our flight two years ago, I think that is a good thing. One of the reasons that I love flying on Alaska is consistently having a great experience. Out of all the miles flown on them, I have had so few problems and the crew are almost always so positive and friendly. If I have to be stuck in the middle seat of a 737 for five hours… Alaska is my first choice.

NO SLEEP ‘TIL BROOKLYN 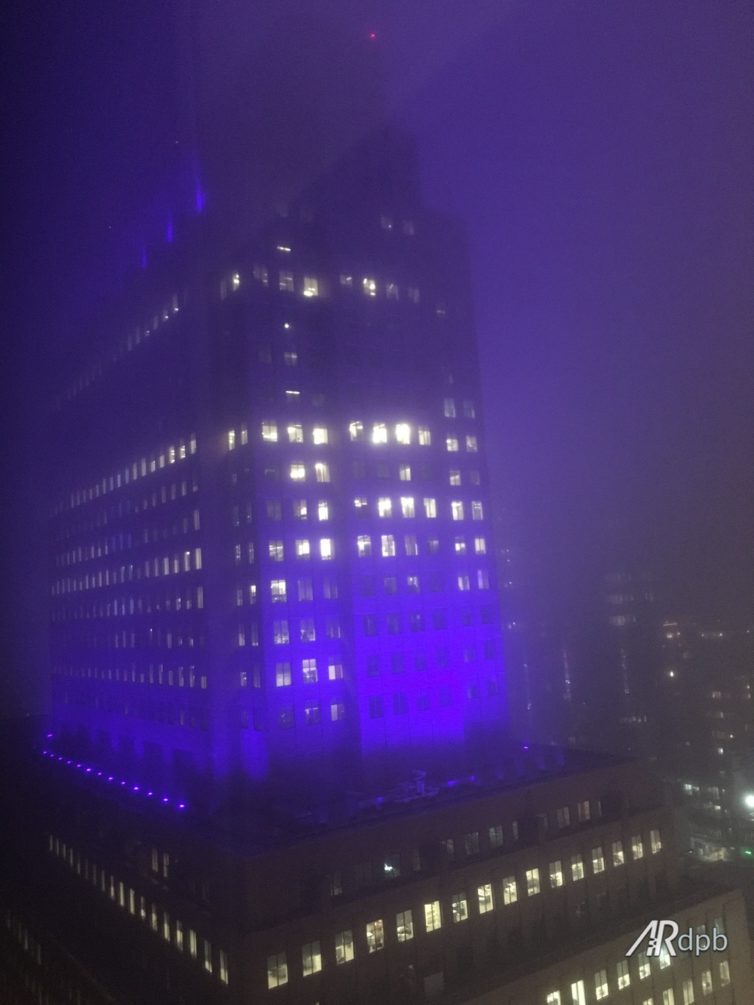 The view from our hotel in Brooklyn — the ALOFT

We ended up flying into Newark and opted to take a Lyft to our hotel in Brooklyn. I warned Brittany that driving works a little different in The Big Apple — you have to think of it as more of an amusement ride than transportation. Our driver didn’t disappoint. 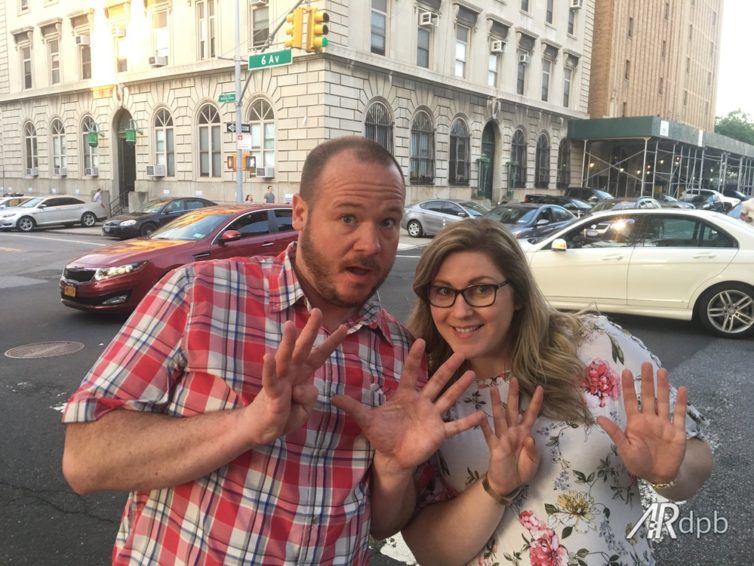 Nerds! Just down the street from our hotel is the police station used in the TV show Brooklyn 99 (really the 78th precinct)

I have been to New York a few times and have stayed in a number of places, but never Brooklyn. I highly recommend it, and would probably choose it again. We chose the location because my pal Jason (aka @AirlineFlyer and one of the guys I flew in a few Beech 1900Ds with) lives in the area; there was super easy access to Manhattan via the subway; and the hotel was nice and way cheaper. Like anywhere, there are a few sketch places, so using Google Maps Street view can be helpful.

We only had four days in the city and I will say that we accomplished quite a bit. Although there was one part of New York that I was very disappointed in… 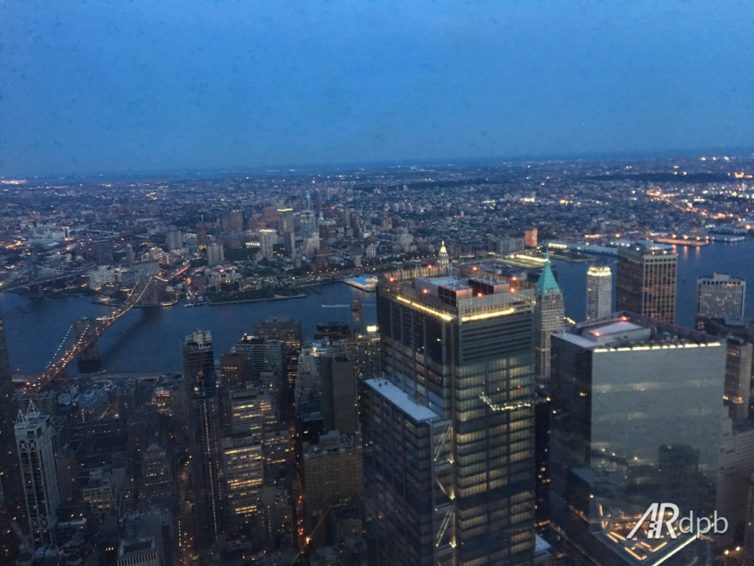 We took a photo of a young couple and were hoping that they would do the same — nope. We barely got one shot from the observation deck from the One World Trade Center before bailing

We were told to visit the Empire State Building (correction: actually, I was told to go to the observation deck at 30 Rock) and forget the One World Trade Center (by more than one local). However, I didn’t listen. I am a pretty patient person and can handle tourist crowds, when needed. But I have never seen such incompetence and lack of respect for the visitors, and the history of the location.

The experience of getting to the observation deck felt like a mixture of total chaos and a condo timeshare sales pitch. By the time we made it, Brittany and I were both done and we both got the heck out of there. 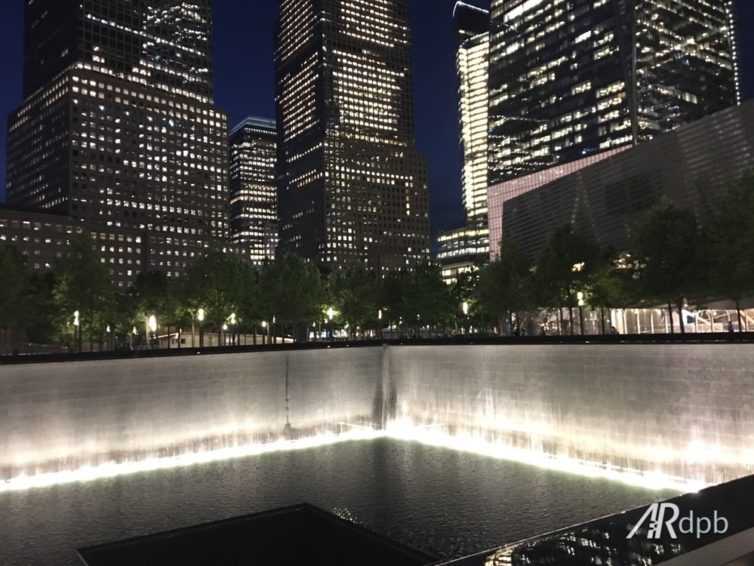 The two reflecting pools where the original towers once stood.

Annoyed and just wanting to get back to the hotel, we came across the two reflecting pools and all the frustration melted away almost instantly. They were very powerful.

My advice (which is the same that I ignored) is to head to the Top of the Rock Observation Deck, and then check out the 9/11 Memorial and Museum.

I could have easily hung out in New York for a bit longer, but oh man… I was super excited about taking the TRAIN!

TIME FOR THE TRAIN – CHOO CHOO 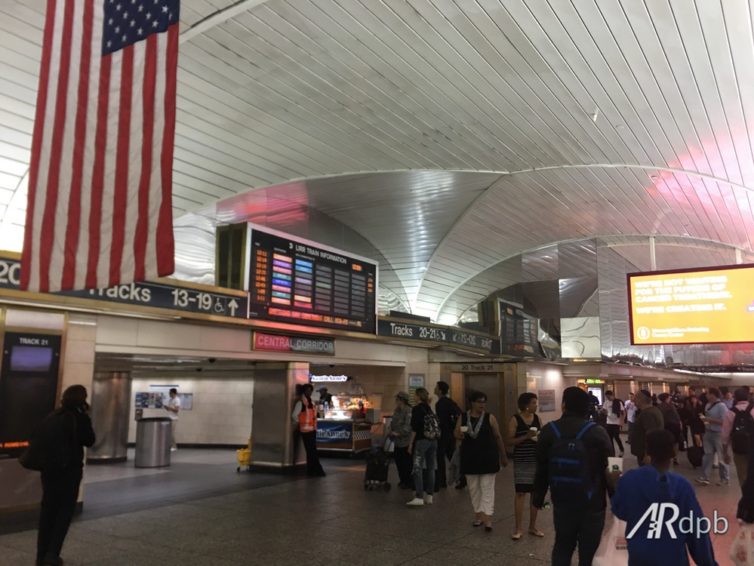 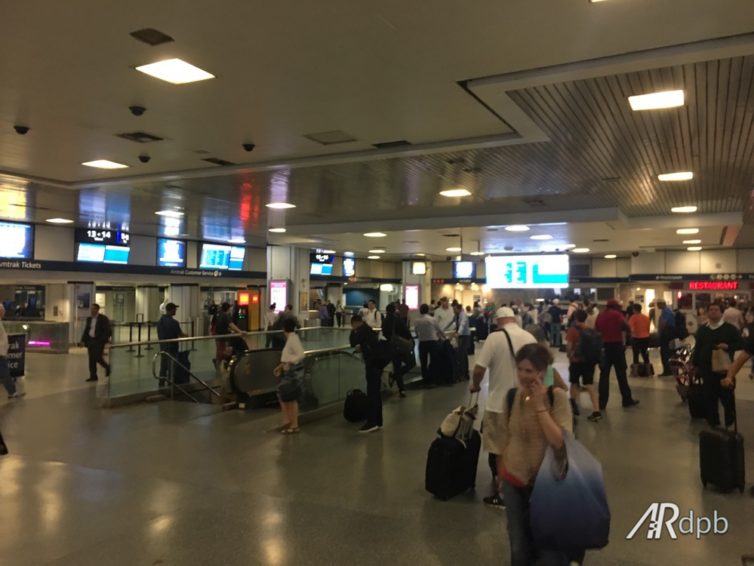 I want to put it out there that I love a good train, but my level of knowledge is pretty low. I know many of you are both AvGeeks and Railfans and I am all about learning, so let me know what I might have missed in the comments.

This was my first time using Penn Station and… yea… it is interesting. Each section had its own unique architecture (mostly not in a good way), and the temperature changed by at least 10 degrees from one section to another. Most things were set up with the expectation that everyone there knew what they were doing. I felt like it was my first day at a new school that was already in session.

We ended up finding where the train would depart and were herded into this passenger waiting area. Later we found out that there was a lounge that our ticket class gave us access to… bummer. It is interesting that the Amtrak staff that checked us into the herd waiting area never said anything. 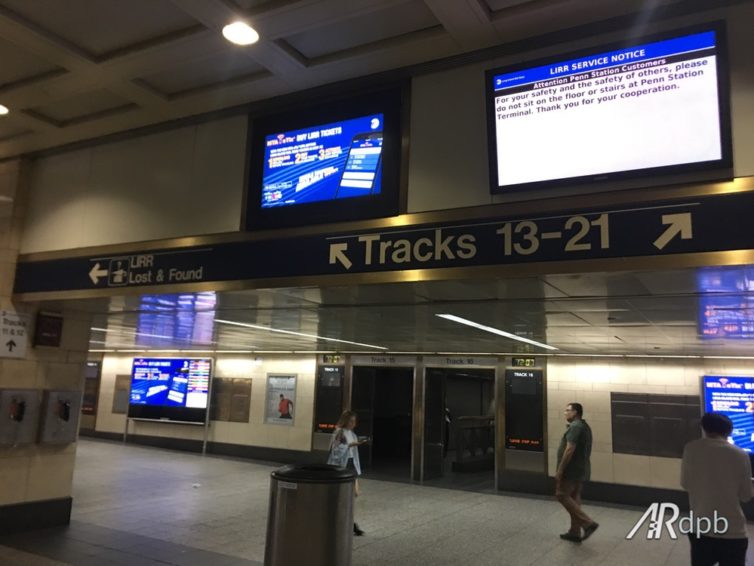 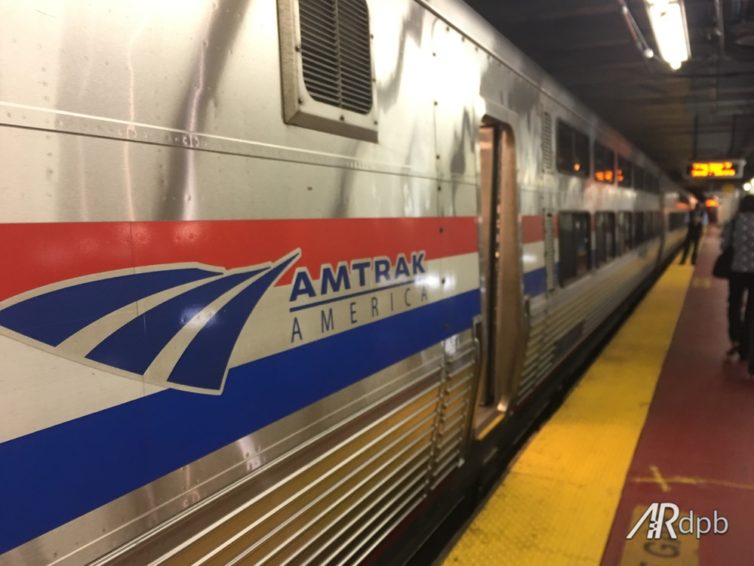 When it got close to our departure time, we were told to head out to a big open central area with screens informing passengers of their train’s track. There were lots and lots of people there just waiting for their track number to pop up and when it did: pandemonium! A big group of people would rush their way to an escalator to be first on the train. I am guessing this might be normal for some, but for us, it seemed nuts. It makes the airline boarding process seem completely tame. 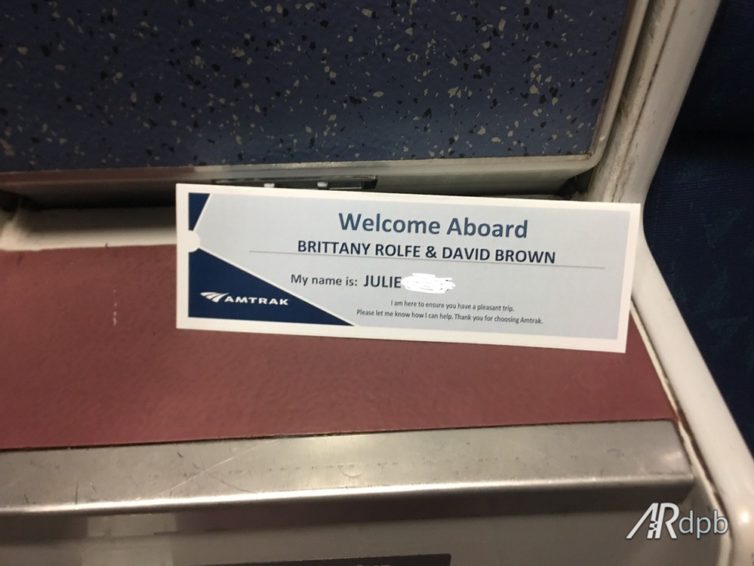 Then it was our turn. Since we had a reserved room, we weren’t too worried about the hustle. When we got to the track, it wasn’t obvious which car was ours, so we asked an Amtrak employee. He told us it was on the far end. Cool. We got down there and it was a baggage car. We asked someone else and they told us it was all the way where we just came from. Sigh. At least the Amtrak employees were consistent (I say that not in a complimentary way)!

We finally found our car, made our way in, and we were welcomed by our attendant. She showed us our room and it even had a nice little sign, making us both feel confident that we were in the right place! 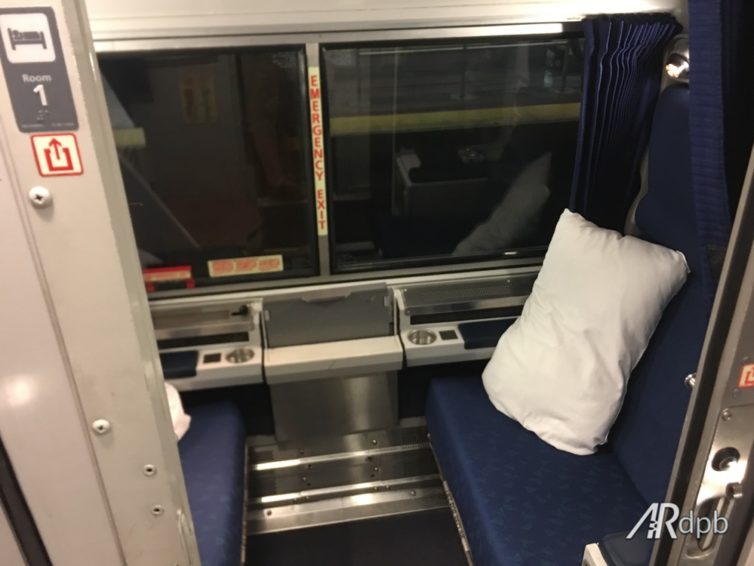 Our home for the next 18 hours. You can see the slider door on the right that closes the room from the hallway.

Before our trip, I had done research on what to expect from our little room. I looked at photos, watched videos, and saw many folks mention that it is hard to really capture it without seeing it in person. I would agree. 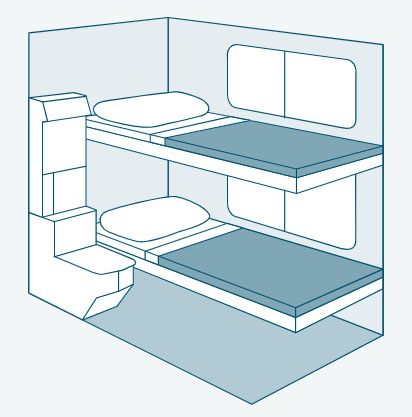 Easily the most interesting part of the room was the sink/toilet combo. Yes, that is right… in the very small room, there is a folding sink and a flushable toilet that sits between the chair/bed, and a small wall with a curtain into the public hallway. Good times.

I hate to do this, but I am splitting this story in two parts, but you are only one click away from reading PART 2 of this story, which will not only go over the famous toilet, but also our dining, and sleeping on the train (to be clear, these all were done separately). Plus our sweet convertible drive down the Florida coast! And I will also share the one part of the trip that Brittany will probably never do again. Stay tuned!

EDITOR-IN-CHIEF & FOUNDER – SEATTLE, WA. David has written, consulted, and presented on multiple topics relating to airlines and travel since 2008. He has been quoted and written for a number of news organizations, including BBC, CNN, NBC News, Bloomberg, and others. He is passionate about sharing the complexities, the benefits, and the fun stuff of the airline business. Email me: [email protected]

Enter a Funny, Creative, But Not Too Weird Title Here — For All The Clicks